The objectives of the project are to design, implement and validate a prototype of an integrated technological platform that can analyze the information provided by the Smart LNBs, integrate it with other measurement systems (eg rain gauges) in order to improve the precision of measurements and the accuracy of results.

Nefocast SVI.I.C.T.PRECIP. will provide a highly detailed and accurate state of cloudiness and precipitation over a very brief period

– During the project an experimentation and validation campaign will be carried out by installing a group of Smart LNB terminals integrated with rain gauges spread across the region in a uniform manner in order to collect the data transmitted by them and generate precipitation fields.

– These fields will be correlated with the information collected by a meteorological radar in order to validate the implemented rain retrieval algorithm.

– During the project an app will also be developed to present the data: it will be made available during the experimentation phase to  a closed group of users. Later in the project it will be integrated with other solutions for the distribution of warning messages to the general public.

– The heart of the system will be the integrated technological platform that will be integrated with Eutelsat‘s  EBIS satellite platform from which it will receive data on signal attenuation and information transmitted by the rain gauges connected to Smart LNBs.

– This platform will also implement the rain retrieval algorithm and interfaces with the public utility app in order to present data to users.

– The project also envisages the study and implementation of any possible changes to the  communication standards of the terminals as well as evolutions of the EBIS platform necessary to interface it with the integrated technology platform.

PRO.GE.COM. S.R.L. ( (PROGECOM) will be in charge of developing the application for the presentation of data.

The University of Pisa Information Engineering (UNIPI) will study the mathematical models to characterize the precipitation based on the available information.

The National Inter-University Consortium for Telecommunications – Laboratory RaSS ((CNIT), and the Institute of Biometeorology of CNR (IBIMET) will study the physical models at the base of meteorological precipitation phenomena and define the rain retrieval algorithm to be implemented in the integrated technological platform . They will also deal with validating  the information gathered during the experimentation, and correlate it with those collected by a meteorological radar.

All the partners will be involved in the experimentation according to their specific skill set.

– During the experimentation, the integrated technological platform will be interfaced with the EBIS platform of EUTELSAT, with which an experimental agreement has already been signed.

– At the end of the project, the integrated technology platform will be fully operational: Following on from the commercial evolution of the EBIS platform, as the number of Smart LNB terminals increases, it will be able to provide accurate data on precipitation throughout the European area and subsequently at global level. 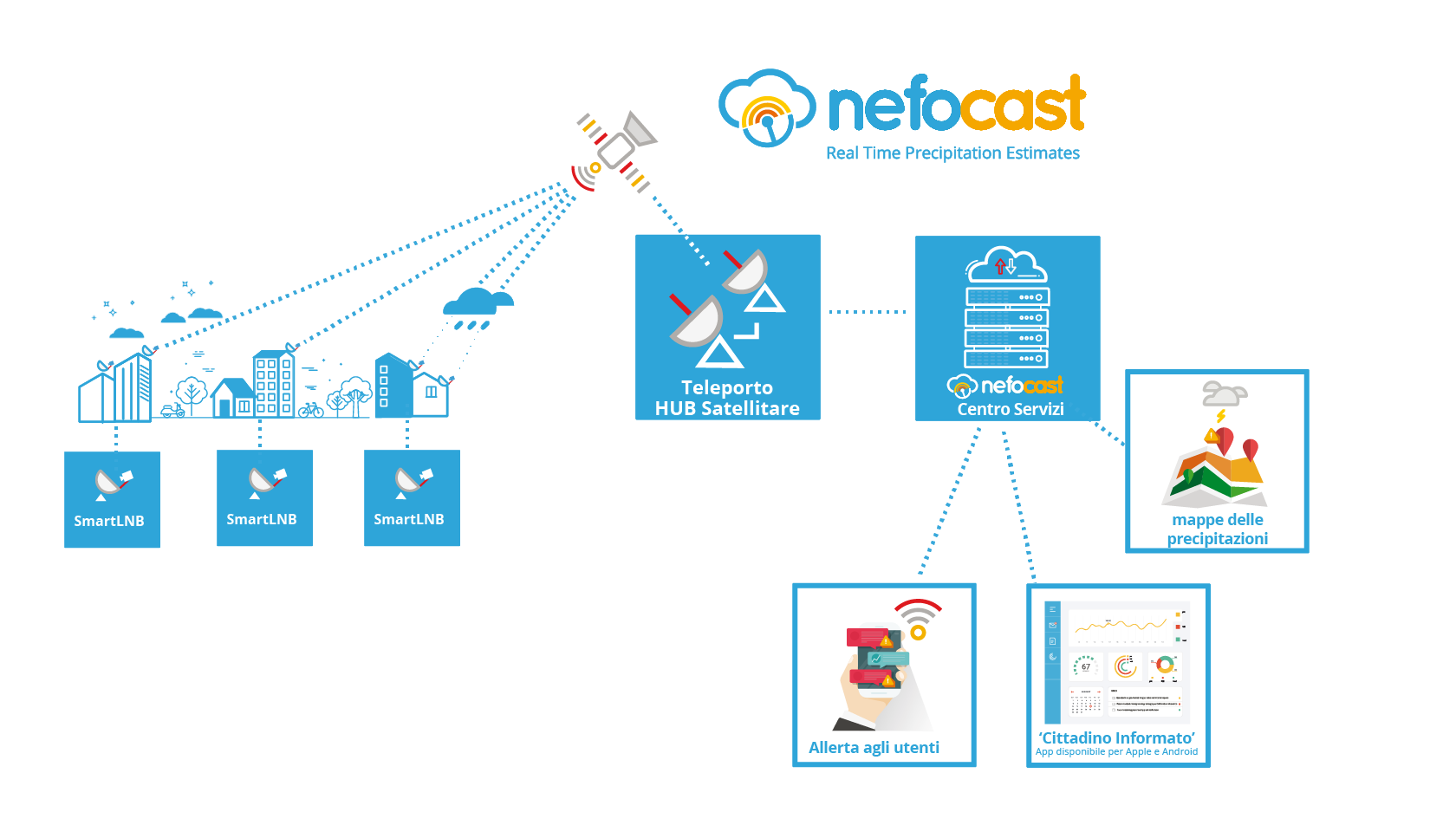 Nefocast SVI.I.C.T.PRECIP. will analyze the information collected by the Smart LNBs and transform it into detailed precipitation maps